The Lawrenceville Arts Commission was organized in 2019 and launched in 2020 to promote the expansion, education, and enhancement of public art in the City of Lawrenceville. The LAC’s mission is to emphasize the role of the arts in the cultural enrichment and aesthetic quality of the City’s physical environment, the mental wellbeing of the City’s residents, and the community heritage, character, and identity of the City as a livable, sustainable, vibrant hub for the arts and artists. For more information, contact us at [email protected].

The City of Lawrenceville and the Lawrenceville Arts Commission released their first arts improvement projects in the downtown area and newly adopted logo.  The projects include renovations of an alley way on the square which led to the creation of Shoe Horn Alley - a pathway of twinkling lights and gas lanterns connecting Perry Street to public parking.  Additional projects include two Depot District signs to be installed on Perry and North Clayton Streets to limit the entry of large commercial vehicles into the downtown area. Construction of the sign will begin in mid 2022.  Read more here. 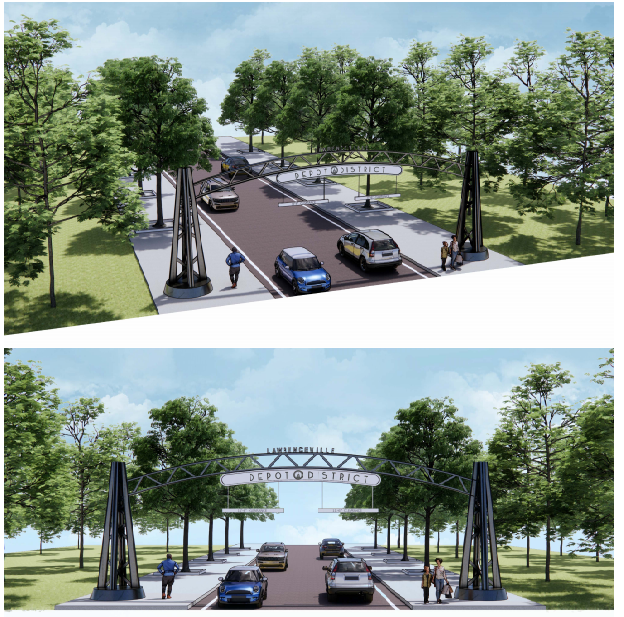 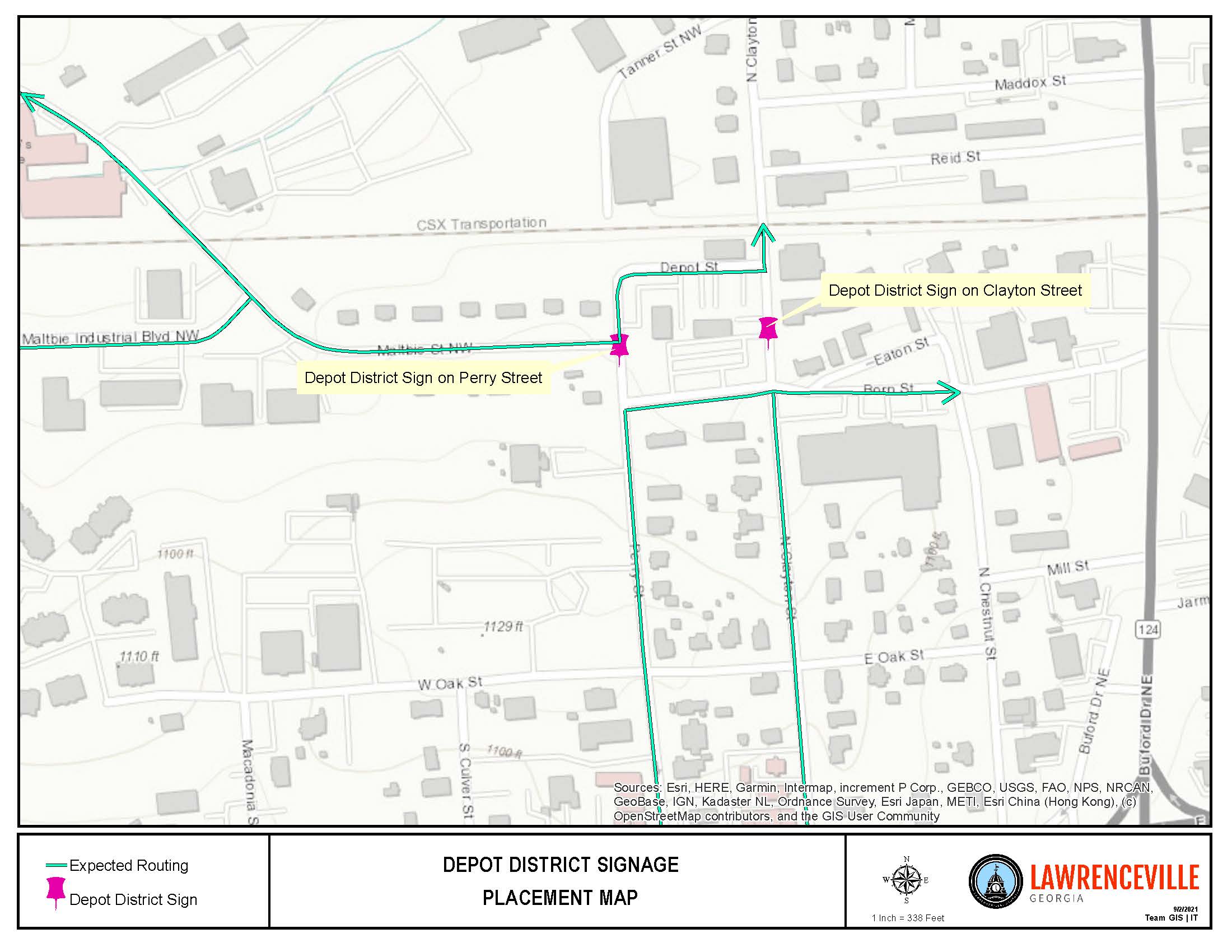 Commercial vehicles can use the route indicated by the green arrows to navigate the City.

Meetings are held at 6:00 pm on the 2nd Tuesday of each month in the GWMA Large Conference Room on the 3rd floor of Lawrenceville’s City Hall, located at 70 S. Clayton Street, Lawrenceville, GA 30046, and are open to the public.

The LAC is composed of seven Gwinnett residents and members of the local art and business community who serve two-year terms as volunteers.

Check out The Lawrenceville Arts Commission at upcoming events for a FREE and fun rock painting craft to promote "Lawrenceville Rocks!" 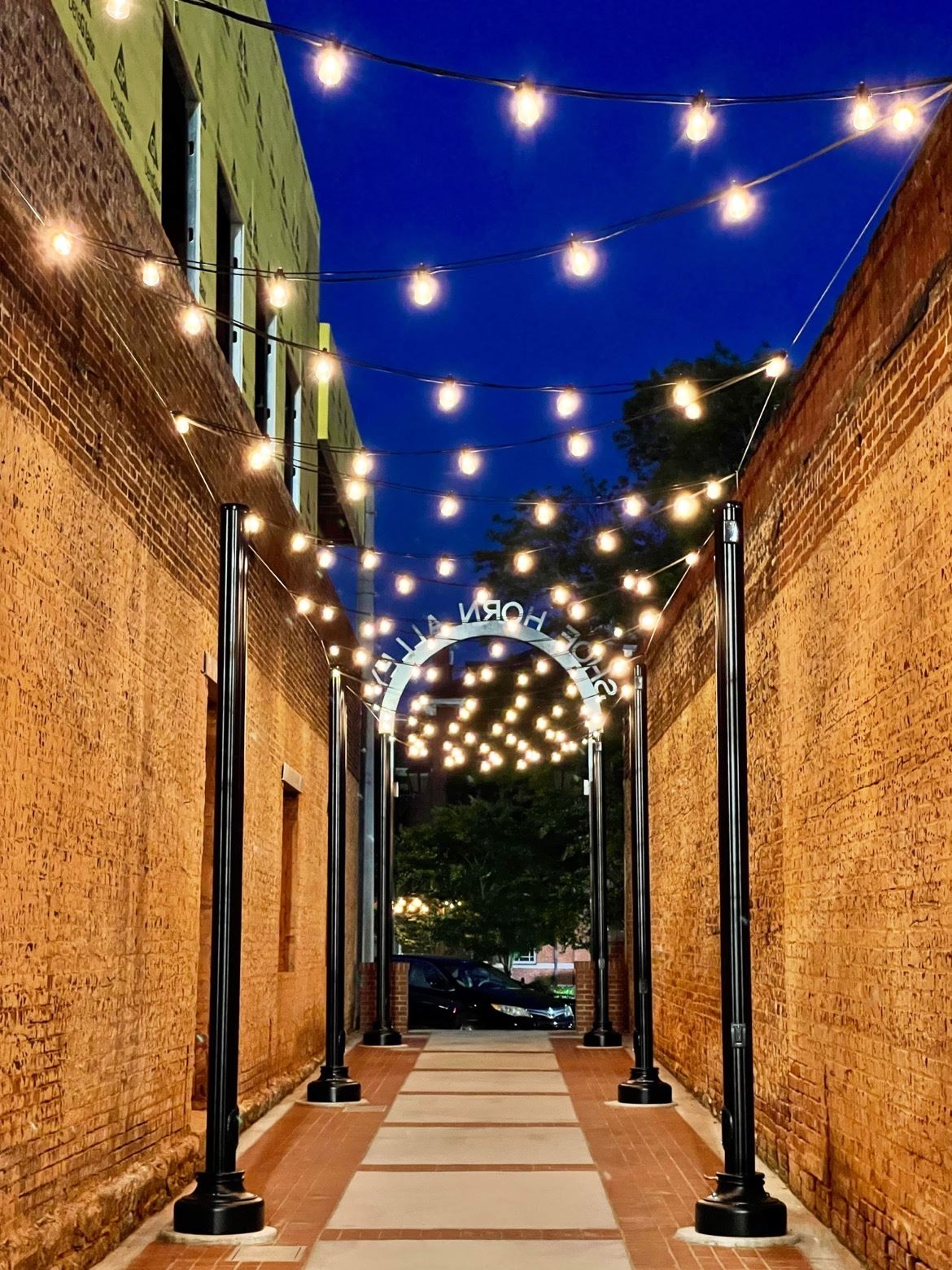 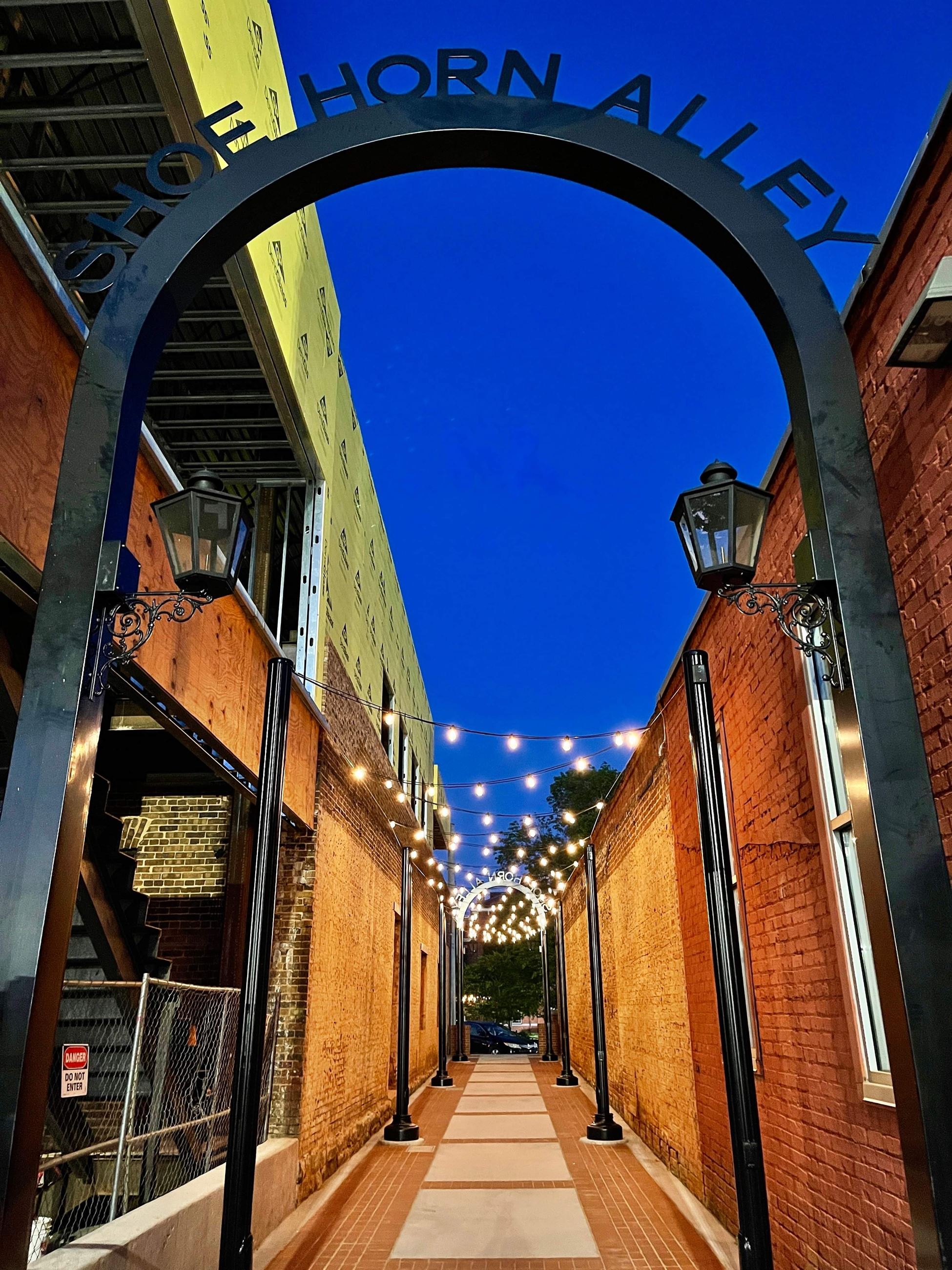 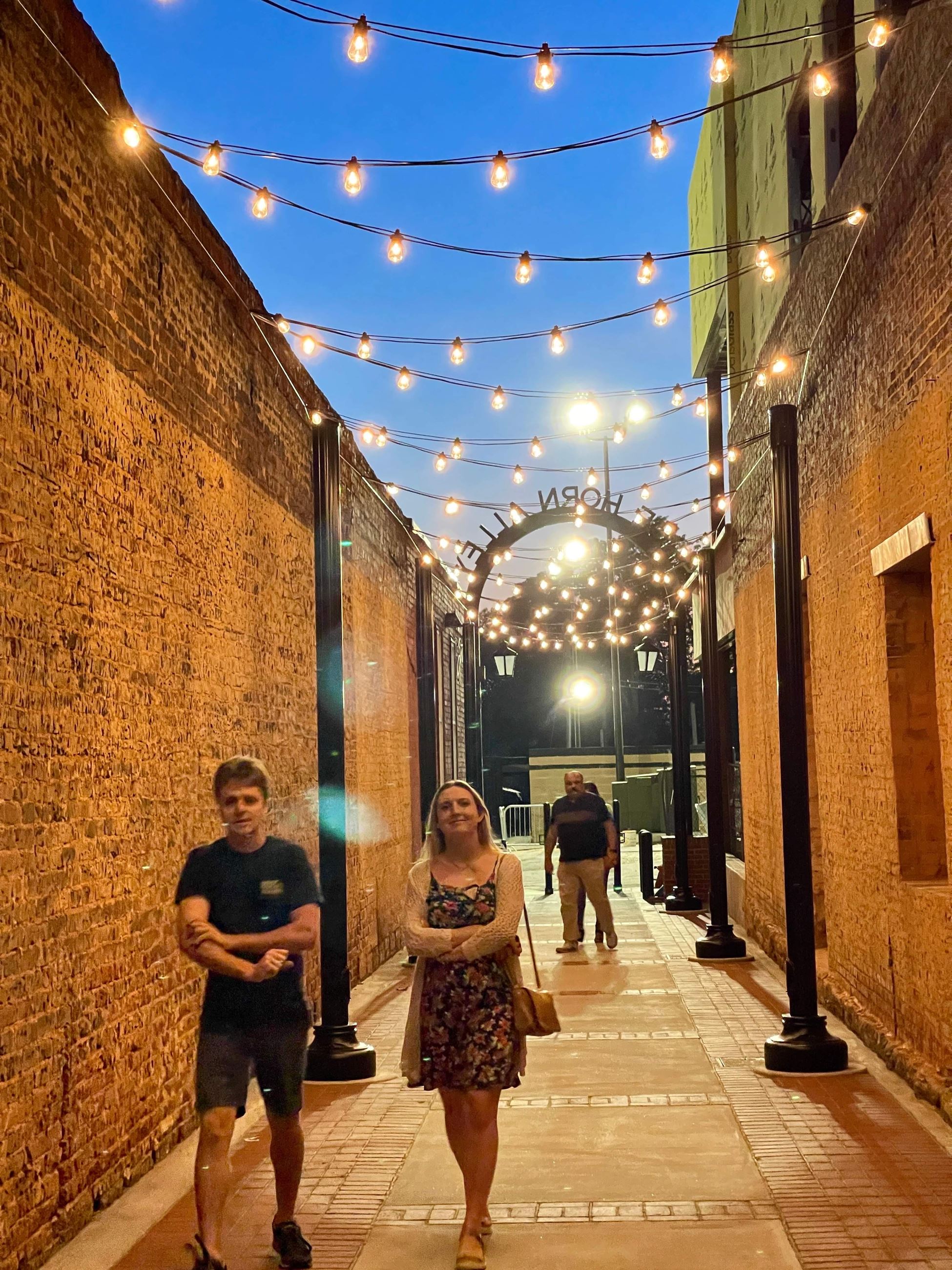 Aura-Leigh graduated with a BS in Psychology from Georgia College & State University, a Masters in IT from AIU, and studied art history and architecture as part of Georgia Tech Lorraine’s Study Abroad program in Metz, France. She was director/instructor of the Internet Specialist Program at Lanier Technical College for five years, then in 2006 joined the corporate world as a UX designer for clients like AT&T, Sony, United Health Care, US Bankcorp, Hilton, Red Bull, and others. In 2014 she took over the newly-founded Dizzy Gypsy Local Awesomeness & Creative Studio on the Lawrenceville Square and became active in the local community. She is currently the Business Operations Director for Local Restaurant Group (Local Republic, Strange Taco Bar, LR Burger, and Laundry Events) and continues to organize Dizzy Gypsy events featuring local art and artists at Gwinnett businesses and venues.

Aura-Leigh has lived in Lawrenceville since 2002 and is married with two children, a daughter attending Georgia State University and a son in high school, both of whom are active musicians and artists.

Alice earned her BFA in drawing and painting from the University of Georgia, an MFA in studio art from the University of Tennessee, and has exhibited her work regionally and nationally. She has been a resident artist at Kentucky Museum of Art and Craft and the David and Julia White Artist Colony in Ciudad Colon, Costa Rica. Alice has been featured on Studio Break Podcast and her work was published as the cover art for Aurora, The Allegory Ridge Poetry Anthology. She was also a finalist for the Jean-Claude Reynal Scholarship among other honors and awards. Her work highlights the tensions between the mundane, the every day, and the apparent dead.

She is currently a faculty member and Lecturer of Art at Georgia Gwinnett College.

Jennifer Hammond is the Executive Director of the Buford based, I AM B.E.A.U.T.I.F.U.L, Inc., a mentoring program that empowers girls and women to believe in themselves and to pursue leadership opportunities in STEAM (Science, Technology, Engineering, Arts, Math). Jennifer joined IAB in 2019 as a mentor and matriculated quickly in organizational leadership to later become the Mentor Coordinator, Grants Coordinator in 2020, and Assistant Director in 2021. She took on the role of Executive Director in August 2021 and has quickly enhanced the organization’s virtual learning and mentoring platform. Prior to joining IAB, Jennifer served for over 20 years as a transformative administrator and educator within Chicago Public Schools, Joliet School Districts, and Gwinnett County Public Schools.

Additionally, Jennifer has a Bachelor of Arts in Mass Communication from Clark Atlanta University, a Master of Education in Elementary Education from DePaul University, and a Master of Arts in Educational Administration from St. Xavier University.  In addition to her tenure in education, Jennifer is active in the television, film, and entertainment industry. She is a trained voiceover artist, actress, and screenplay writer. She’s served as an assistant director and production assistant for numerous documentaries and short films. She previously was the Assistant Director of Drama Kids-DeKalb.

Jennifer is a dedicated volunteer and philanthropist for various community organizations including the Gwinnett Remembrance Coalition and Clark Atlanta University Alumni Association-Atlanta Chapter.

Of the many roles, Jennifer takes on, her role as a mother is what makes her most proud. Jennifer is the number one fan and momager of her teenage son, Micah, an aspiring writer, performer, and film producer. He is currently a student at Central Gwinnett School of the Arts. Jennifer is passionate about creating equal education opportunities for our youth. She believes that exposure, mentoring, and nurturing the natural talent(s) in every child will create endless pathways of opportunity.

Amber has been teaching the Humanities and Art Appreciation since 2009 and has served as Program Director of Humanities since 2014 at Gwinnett Technical College. She has a BA in general studio art and a BFA in sculpture from the University of Georgia along with an MFA in sculpture and expanded practice from Ohio University. She works mostly in 3D, having created many stand-alone sculptures, large installations, and interactive "wearable" art.

Amber’s family has deep roots in Lawrenceville and she continues the tradition by being involved in helping Lawrenceville to grow into a fun arts and culture hotspot for metro Atlanta.

Alicia holds a BFA in Art from Georgia State University and has studied dance since the age of four, training with master teachers such as Robert Barnett, David Howard, Thom Clower, Laura Alonso, and Twitch. Alicia owns and directs Southern Performing Arts Academy and the non-profit dance company, Southern Ballet Theatre, both of which celebrated their move to a brand new three-story studio at Historic City View on the Lawrenceville Square in June 2021. SPAA has trained hundreds of young dancers, some of whom have gone on to dance with the New York City Ballet, American Ballet Theatre, and Walt Disney World.

Alicia was born and grew up in Lawrenceville and is married to Brandon Chitwood, also owner and director of SPAA. They have three young children.

Katrina has worked over 20 years in manufacturing, sixteen of those years having been dedicated to the creative design, development, and production of branding items for the fashion industry.

Katrina is active in the Lawrenceville community, having served on the Downtown Architectural Review Board and the Downtown Development Authority.

Nancy is an established artist, published poet, and owner of Nancy’s Candy & Spice, which she started on the Lawrenceville Square in 2011. She has had numerous art shows around the country and her paintings have received Honorable Recognition from the Susan Kathleen Black Foundation in the 2011 Blossom 2 International Competition. She is a member of the Jordan Writer’s Society and her book of poetry, Soul Whispers, published in 2011, received Honorable Mention at the 2014 London Book Festival and she was nominated for 2011 Georgia Author of the Year with the Georgia Writers Association. Her artwork has been used as the cover for the international poet, Ihab Elshalabi’s, books of poetry. She is very active in the local and regional art scene, having served as a judge for many art and poetry competitions.

Nancy has lived in Lawrenceville since 1997 and is married with twin daughters and a son. She is currently studying English Rhetoric at Georgia Gwinnett College.